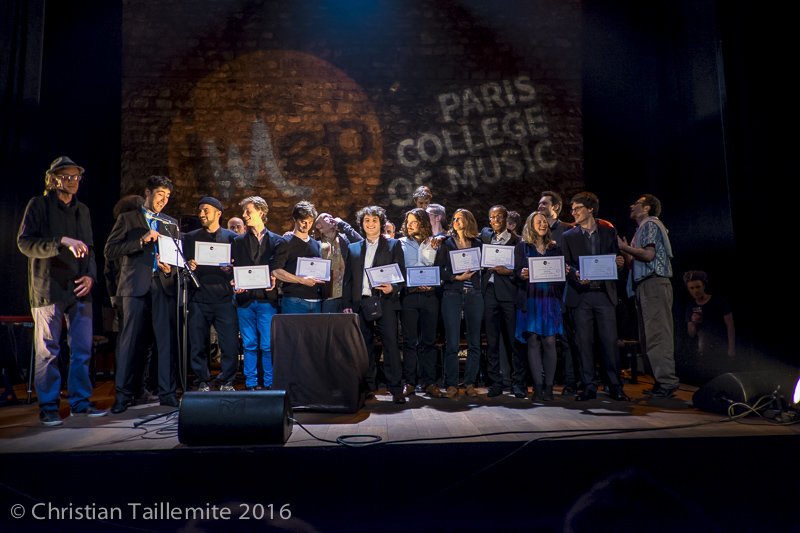 The IMEP Paris College of Music is organizing its annual diploma ceremony for its promotion 2015. These are the students who have successfully completed the five years of our curriculum. The principle is that each student publicly demonstrate either of his instrumental skills as a soloist on stage, or his writing skills with a piece written for string quartet, or arrangement skills, by writing an arrangement for the big band performed and conducted on stage.

At 19:30, the kickoff of the official evening was given by head teacher, professor of arrangement, François Fichu, opening speech :reminiscent of the great innovations of the year 2016 at the IMEP Paris College of Music : new name, new visuals, new website, but also remodeling the educational program for the first year, creating a weekly instrumental lessons included in the program, and a new course of musical culture (MAO training (Computer Aided Music) and jazz culture). The second year will be rewarded with an extra weekly hour of workshops. Other program developments are planned in the near future, especially in the field of digital audio, but also concerning the integration of Web tools as part of a professionalization strategy (communication, online music sales …) . However, the most anticipated new of the evening was undoubtedly the official announcement of the whole school move for the beginning of September 2016 unique new and larger premises, located in Paris, 14th arrondissement, close to Denfer Rochereau; ad widely applauded!

Then the big band started with “The Wall” (Roger Waters) arranged, directed and performed on guitar by Juliette Heilmann, featuring Paul Braillard on vocals. Followed by, “le Cinema” (Michel Legrand) arranged for big band and sung by Pablo Lepetit, conducted by François Fichu

Following, the trio of Yassin Kramdi (piano-vocals), Sacha Leroy Delvallée (bass), and Corto Vermée (drums) have played “Spanish Joint” (D’Angelo) and bIt’s On “(George Duke), then the big band came back with “C Ou Ki Lanmou” (Mario Canonge, translation “This is love!”) arrangement, piano and direction by Xavier Belin, Major of promotion, with Celia Barnabe vocals, big atmosphere on stage and in room !

We were finally able to applaud the arrival on stage of the guest of honor of the evening; drummer Jeff Ballard who has played with the big band a remarkable version of “Stolen Moments” (Oliver Nelson) arranged and conducted by Boris Rappo followed by “Let the Good Times Roll” (Louis Jordan) arranged, sung and conducted by Yassin Kramdi with a convincing power and energy. This was a conclusion to the musical part of the evening on a festive note!

finally arrives graduation time in the presence of Jeff Ballard.

By way of introduction, Bernard Vidal, ensembles and improvisation teacher, reminds us some important points: This diploma is the culmination of a life course of five years, it is a big thing! Well beyond the skills and knowledge acquired, people have raised humanly. What a period, with successes or trouble! Each hurdle allows to grow a little more, either alone or with the help of others. He reminds us that diploma is really well deserved and warmly congratulate the winners – echo of the room that stands up to applaud …

Then each candidate is called on stage to receive his diploma from the hands of Jeff Ballard in the presence of all the teachers. A beautiful moment of sharing and emotion!

The evening will end at the bar with a closing cocktail carefully prepared and enjoyed by everyone. 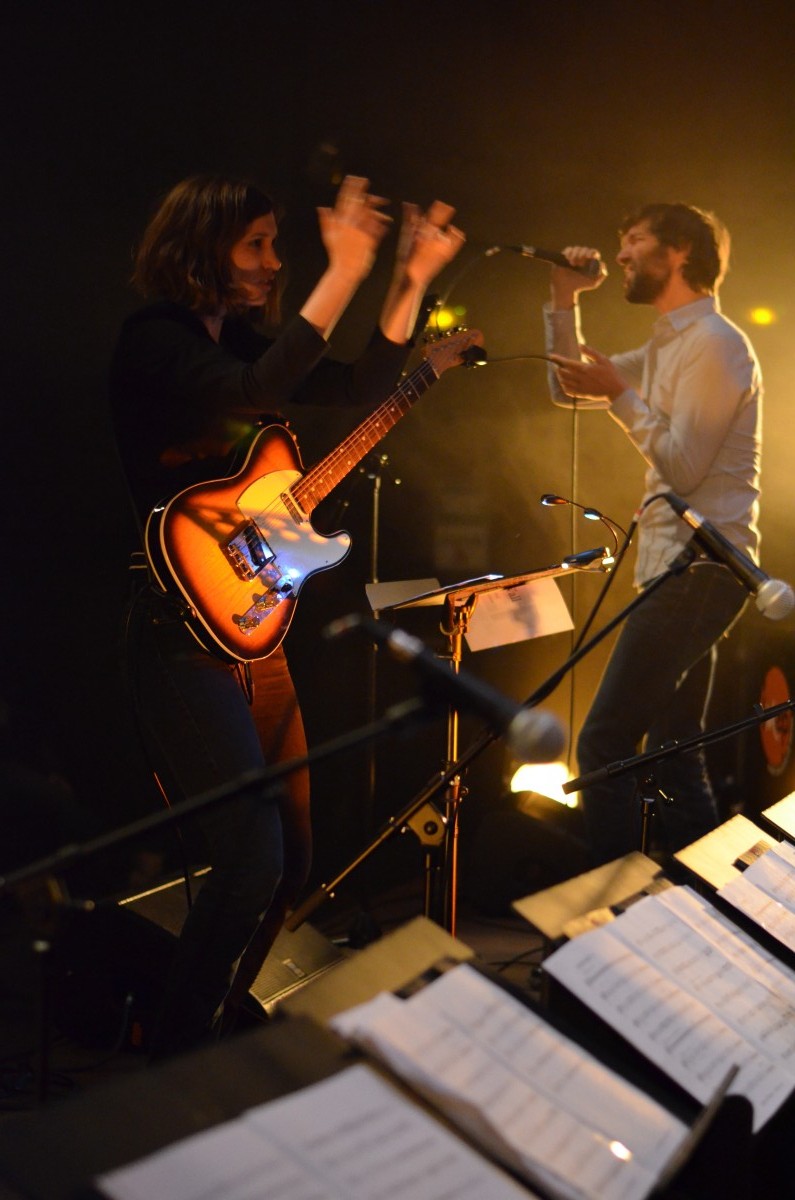 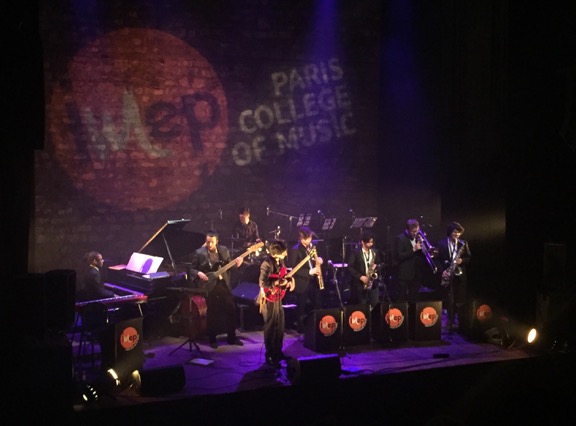 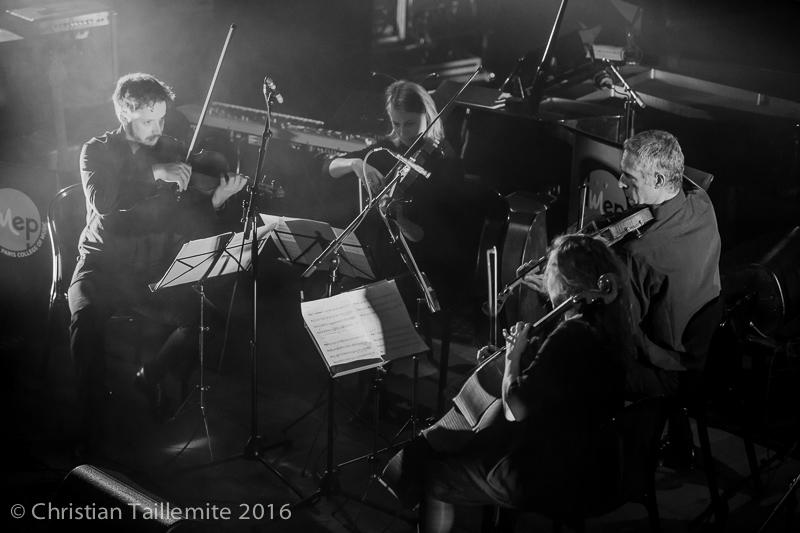 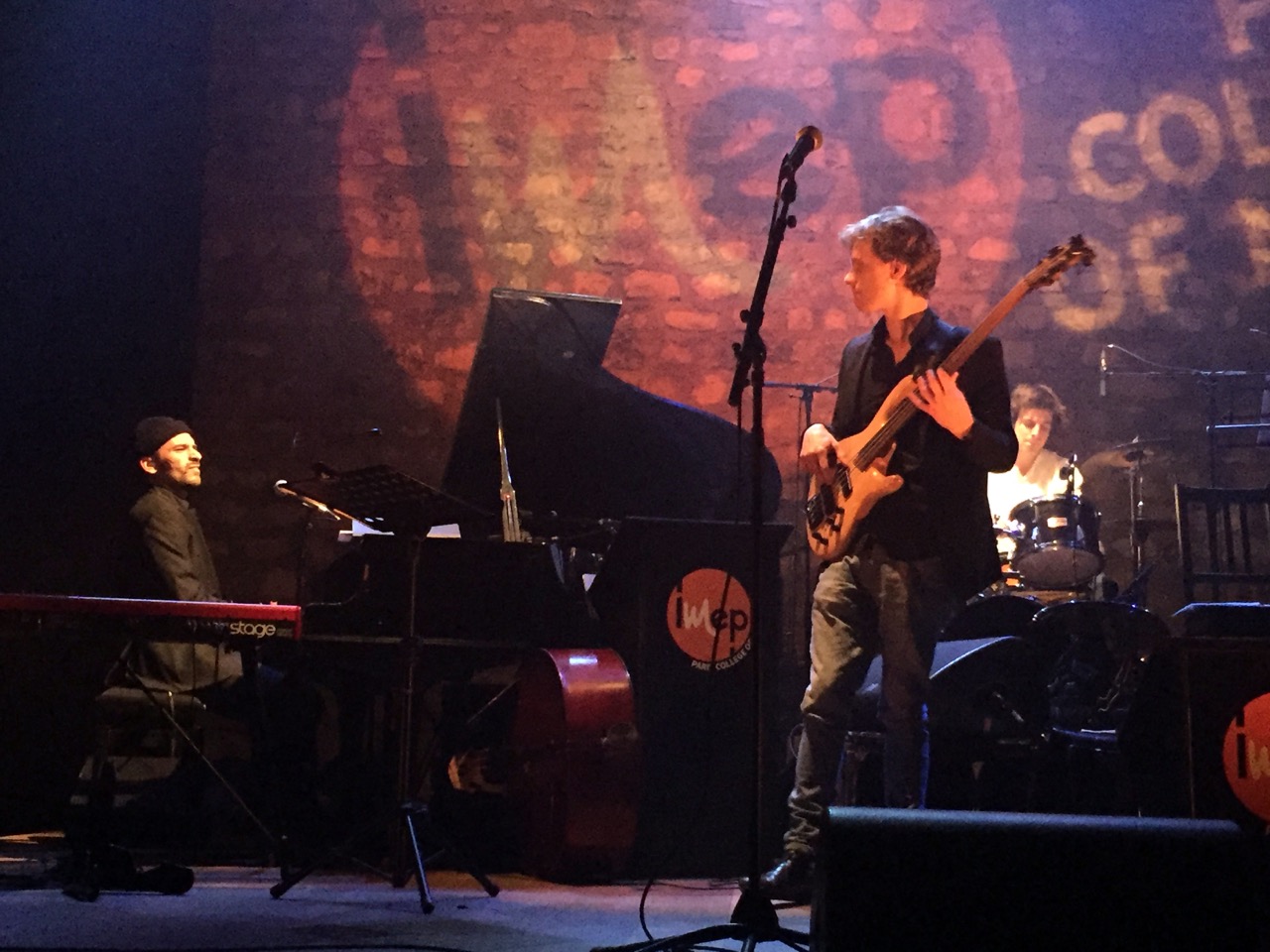 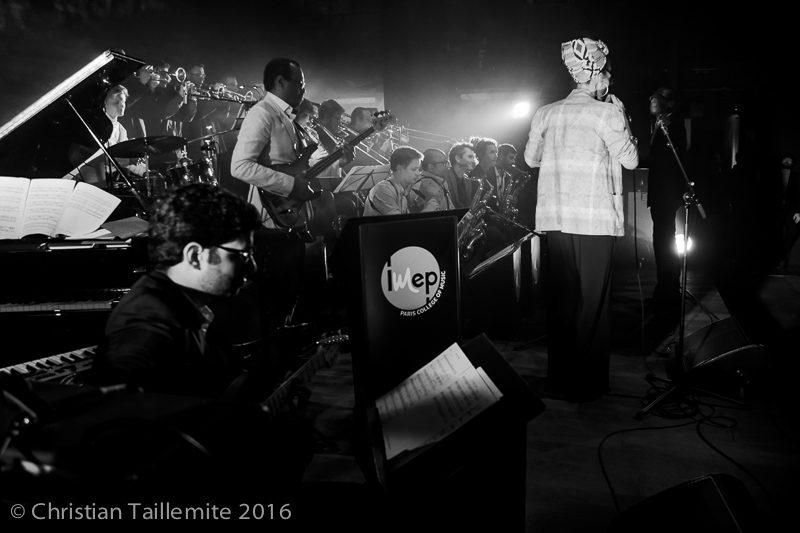 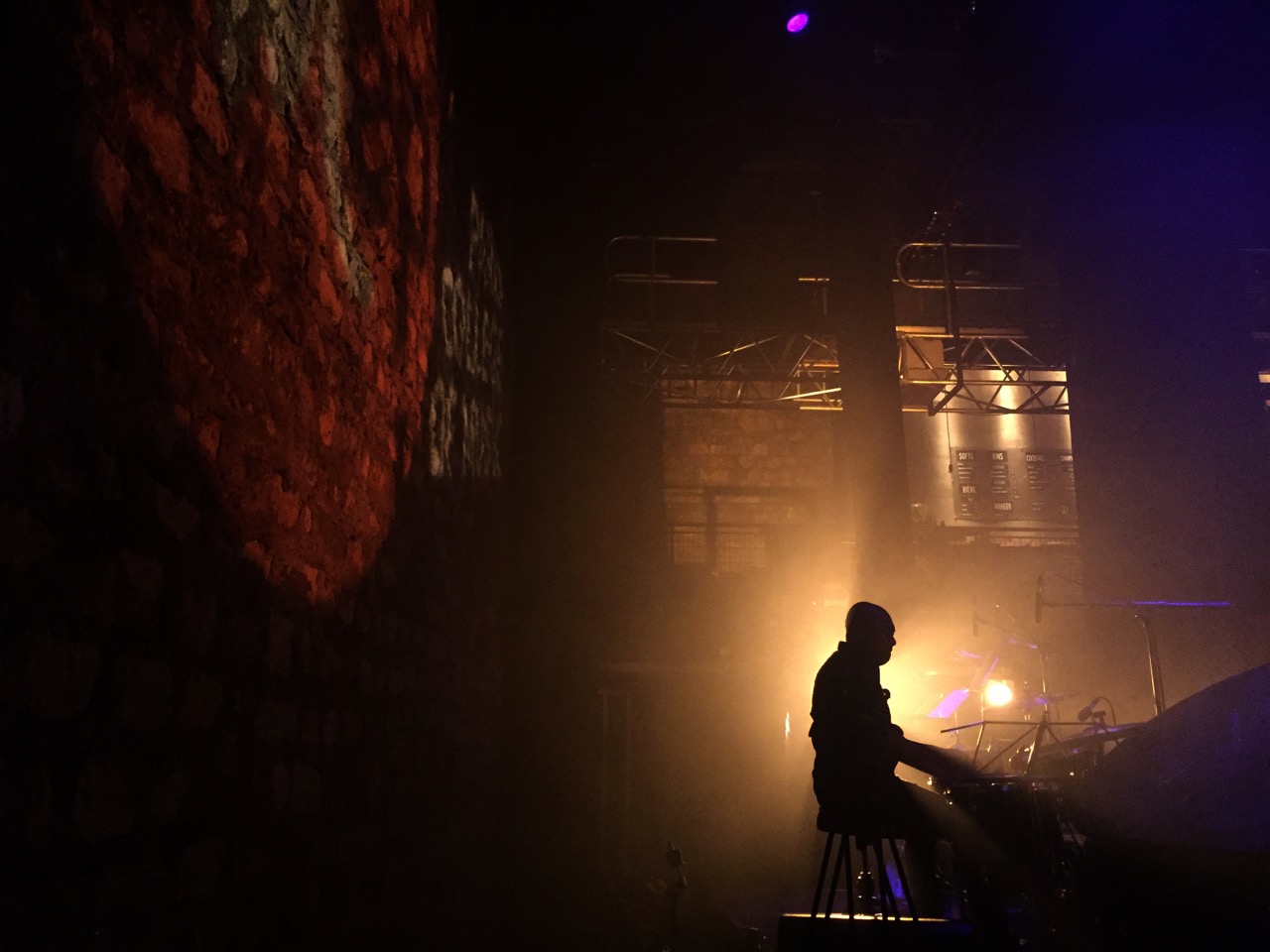 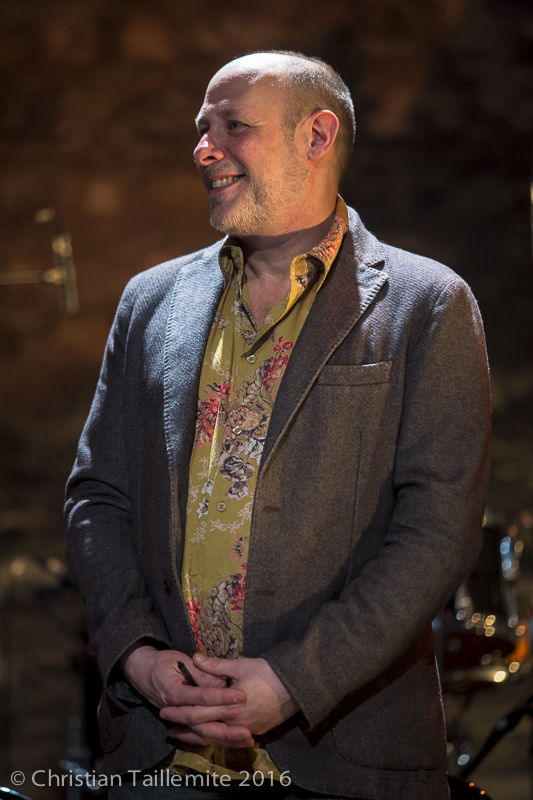