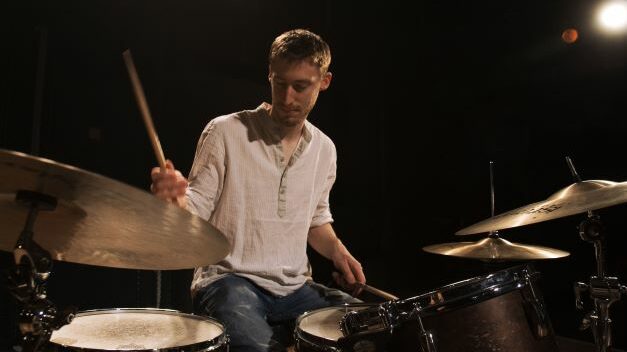 Aurel Violas is a drummer and composer, he studied with Manuel Rocheman and Rick Margitza during his studies.

Aurel Violas lives in Amsterdam, in the heart of a network of musicians from all over the world. His journey took him to the United States, to New York, Boston and Philadelphia, where he studied under Dick Oatts and Rodney Green.

Télérama Sortir : ” French drummer established in Amsterdam, Aurel Violas composes for his trio a music which oscillates between the rhythmic fearlessness characteristic of a certain contemporary jazz and a more romantic inspiration. The latter frees itself from the obsolete simulacra to which it is too often reduced to give grandeur to the trio’s expression.

Completed by Benjamin Thiébault on piano and Matteo Mazzú on bass, the trio interprets the compositions and arrangements of Aurel Violas; they are as many small rhythmic curiosities stimulating the visual imagination, as simple melodies, soothed and tinged with nostalgia. The result is a lively and organic jazz, with a strong emphasis on interaction and inventiveness.